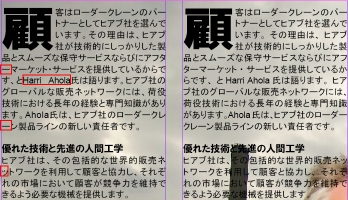 Fortunately, Akebono Translation Service provides the perfect solution for all your DTP requirements. To our knowledge, we are the only translation agency in the Netherlands (and probably even Europe) to typeset Japanese using the Japanese version of Adobe InDesign.

The English version of Adobe InDesign lacks the ability to compose languages such as Japanese correctly. To avoid unnecessary complications and serious typesetting errors, the software must be operated by a native Japanese speaker. Even then, the end results can be bitterly disappointing.

To rectify this problem, Adobe has launched a special Japanese version with extra user options, which compose the Japanese language perfectly. This software however has a Japanese interface and can therefore not be operated by someone who cannot read Japanese. That is one reason to have your texts typeset by someone who understands the actual target language. The second reason is that languages like Japanese and Chinese have very complex rules for line breaks and the like, and that certain aspects of typesetting which are natural for us Europeans, are by no means a matter of course in China and Japan. For example, italics are rarely used in Japanese of Chinese, if at all.

To make a good and lasting impressing on your customers, it is of paramount importance that Asian typesetting is carried out by a skilled expert who is a native speaker of the typesetting language.

Akebono works with the Japanese version of Adobe InDesign, which offers a multitude of Japanese typesetting options. Although this is a separate version, it is backwards compatible with the English counterpart, enabling you to read the outlined end result.